We All Take Risks. Don’t Risk The Couch.   #RuinYourKnees

We All Take Risks. Don’t Risk The Couch.   #RuinYourKnees

Brian takes the Salomon Agile 250 running belt for a spin above the Colorado River to see how it performs.

Having run with Amphipod running hydration belts for years, I was curious to test out a running belt with a more collapsible philosophy.

Instead of the hard plastic running bottles on the Amphipod, the Salomon Agile 250 running belt comes with one 250ml soft flask which collapses and stows away in a zipper pouch while leaving extra room and another compartment for storage.

To test the belt, I decided to go on a reasonably long outing above the Colorado river, making an impression video at each stop along the way.

How much can the Agile 250 running belt carry?

The Agile 250 is easily able to fit the full water flask, a phone and some fuel. Outside of those items and throwing in some keys, this would be about the threshold for carrying capacity. This seems like plenty to me, and should allow an athlete decent time on the trails without the need for a backpack (obviously, use discretion when wilderness areas come into play — it may be necessary to haul more supplies for safety reasons).

Being 6’7″ and nearly 200lbs., my water consumption is generally high but I could probably go running for 60-90 minutes in the summer with this hydration belt and 2-2.5 hours in the wintertime. This would be assuming those times are the entirety of the run. In an ultra-distance situation, I’d take on more water per hours. Speaking of racing, how would the Salomon Agile 250 be for racing?

Racing with the Salomon Agile 250

The hydration flask on the Agile 250 is designed to be stored in the big zippered compartment. For racing, I believe this design would be maddening. Attempting to unzip the belt, retrieve the flask, return it and zip up all while running would be a major hassle.

Using a belt with easily accessible exterior bottles such as Nathan hydration running belts or Amphipods would be much more efficient for a racing situation.

However, on a recreational run where pace is less important, slowing down or stopping to retrieve the bottle is no big deal.

Retrieving supplies from the front pocket while moving isn’t too bad and I liked storing my phone there.

Does the belt bounce?

The Agile 250 running belt stayed nice and snug without bouncing, but I found the larger compartment roomy enough that a partially empty soft flask would bounce around inside the compartment.

When I started the run, the full flask was nice and snug. As I drank water, it began to collapse and shift around. Moving parts drive me nuts on a run, for some this may not be a big deal.

I can recommend the Salomon Agile 250 running belt for recreational runners and hikers who want to get out for a longer trek without carrying a backpack. The belt is comfortable and has good carrying capacity.

If you are racing, or can’t stand shifting gear while running, I can’t recommend the belt. For hiking, the shifting shouldn’t really be very noticeable and I suspect this would become a perfect belt for those routine evening hikes and walks. 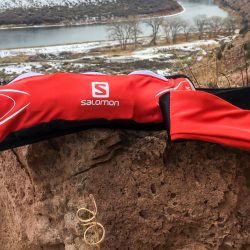